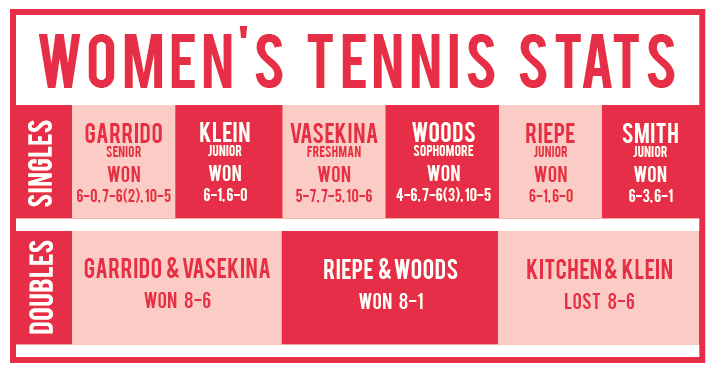 Presbyterian College came down to Georgia Southern University this weekend and was blanketed by an unrelenting women’s tennis team, 7-0.

The Eagles won two of the three doubles matches and swept the Blue Hose in all six singles matches.

To bring it home for doubles were GSU freshman Giulia Riepe and sophomore Stephanie Woods when they handily triumphed over PC senior Patricia Alves and freshman Madison Utberg (8-1).

“I thought it was a really good first match for us, we came out really strong. We had some ups and downs, doubles was close, we had some close matches and close games but I think we all came out fighting hard and really ready to play,” Mary Phillips Smith, sophomore, said.

“It was great to get out here, I know we were all pretty fired up, and obviously getting a win in the first match is nice, so hopefully we can carry that into the rest of the season,” Klein said.

Perhaps one of the most evenly paired and intriguing matches of the day was Garrido against Ransom, they were neck and neck for most of the match but, in the end, Garrido won (6-0, 7-6(2), 10-5).

The Eagles will have almost two weeks off before their next match against Alabama Agricultural & Mechanical University, which takes place in Alabama on Feb. 7 at 1 p.m.