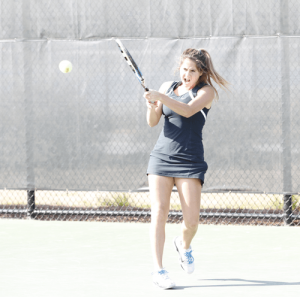 After concluding their fall season on a high note at the GSU hosted their Fall Invitational towards the end of October, accommodating over eight different schools. The Eagles were able to record some very good wins on their home courts. Freshman Lani Tummers was able to defeat her competition and win her singles flight along with going undefeated in both singles and doubles.

The Eagles concluded their fall season in South Carolina at the Wofford Terrier Invitational in November. Senior Paola Garrido, sophomore Stephanie Woods and Klein each dominated the competition and won their flights. The Eagles also took out two of their three doubles flights.

“This was a great tournament for us to end on…the girls are playing well and most importantly coming together as a team,” Head Coach Amy Bonner said in a news release.

“The spring is when we really feel excited about showcasing our teamwork and how hard we’ve been practicing,” Klein said.

GSU will take on Stetson University and Presbyterian College this upcoming weekend at the Hanner Tennis Complex.