Where the Eagles stand in the SoCon 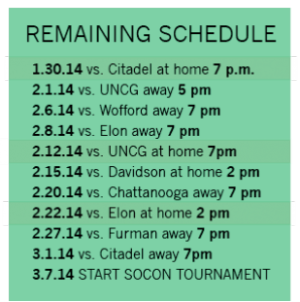 With only 10 games remaining before the Southern Conference tournament begins, the Georgia Southern University men’s basketball team needs to turn itself around if it has any wishes of securing a high seed.

After playing the first six matchups of the 16-game conference schedule, the Eagles have quickly gotten themselves in a hole with a 2-4 record. They currently are tied for eighth place withAppalachian State University, a team that GSU lost to last Saturday 81-68. The two teams will play again, this time in Statesboro, but for now App. State wins the tiebreaker putting GSU in ninth if the tournament were to start today.

The only two conference wins for the Eagles came againstFurman University andSamford University. The Bulldogs sit just above GSU with a 3-4 conference record and the Paladins are next-to-last in the league having only won one SoCon game.

Of the remaining games, the Eagles will play The Citadel,Elon University and the University of North Carolina – Greensboro two times each.

The Citadel has made itself at home in last place with a 0-7 record, so winning both of those games will be crucial – but GSU should have no issues. As for the set of games against the Phoenix and the Spartans, a victory won’t come as easy. These two teams are 3-3 and 3-4 in the SoCon, respectively, but are beatable.

If GSU can come out of these six games with five wins and then go on to steal a victory at Wofford College or at home versus Davidson College, the Eagles could realistically finish the year with an 8-8 SoCon record. This could get them as high as a five seed, but probably no higher.

As it stands now, a five seed or a six seed would have them facing off against Samford or UNCG in the first round of the tournament. Winning against either of those teams is an easier task than having to go up against Wofford’s defense with the season on the line.

It is hard to predict how the whole picture will end up since many of the teams are all so close. Other thanthe University of Tennessee at Chatanooga, who seems comfortable at the top with an 8-0 record, and Davidson, the rest of the league could go any which way with this many games left.

But the way things are shaping up as of now, the Eagles need to walk out of regular season play with at least six more wins to secure a seed in the top half of the bracket.

The SoCon tournament will start on Mar. 7 in Asheville, N.C.