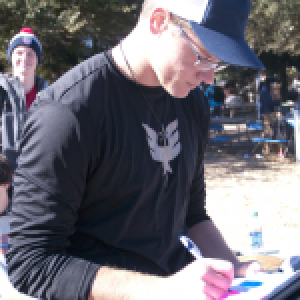 From ultimate Frisbee to religious groups, many student clubs came out in full force to show what they had to offer to students.

“I really do think it’s beneficial for students that don’t know what is actually going on on campus. Even I found something new today that I didn’t know that we had,” Blake Michal, sophomore mechanical engineering major, said.

Students present at today’s fair became interested in their organization because of previous fairs.

“I think it’s really interesting that we have organizations where literally all they do is community service. I actually found the red, gold and royal blue, that was the colors of Columbia and I immediately became interested. I’ve been a sister ever since,” Michelle Lagoueyte, junior public relations major said.

The fair can also help new students get adjusted to campus by introducing them to groups that they were looking for, but didn’t know existed.

An event like the student organizations fair can make new students or transfer students feel like there is a place for them on campus, and that there are many ways of being involved, Aaleeah Bell-McCrary, sophomore economics major, said.

The students running each table found that having a fair is extremely useful to reaching a larger and more diverse group of students that they would not otherwise see.

Marquis Hoskins, senior political science major and member of Alpha Phi Omega, said, “I think it gives us a chance to reach out to people on their way to class and in between and maybe people you might miss who don’t catch the flyers in the union.”