Patti Page is a solid show 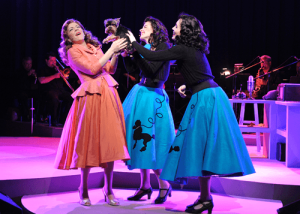 Statesboro locals and students gathered together Tuesday to experience “Flipside: the Patti Page Story.” The musical followed the story of Clara Anne Fowler, a small town girl from Oklahoma.

Truth be told I had no clue who Patti Page was, I was going into this musical as blind as some of the members of the audience. Really, the mean age at this show was about 65, so I wasn’t very excited for the show to start.

The musical started out slow. The melody consisted of a piano and the occasional acoustic guitar. I was worried it was about to be a long 95 minutes.

The first thing to catch my attention were the costumes, beautiful gowns and classic fifties attire flooded the stage. I very quickly found myself actually caught up in the story.

Haley Jane Pierce, who took on the lead role of Clara Ann Fowler, deserves major props. She was a charming and easy to love character. She reminisced on her past life as Patti Page from humble beginnings to stardom. Pierce has serious Broadway potential.

If anything, this show stands out for its symbolism. Flipside referred to the side B of a vinyl record, the side not many people notice, the way Fowler felt about herself.  She was living a double life, dumping her true identity for what the media wanted her to be. The same thing happens today, Lady Gaga was once Stefani Germanotta and Miley Cyrus was once Hannah Montana.

The way the record label took young and naïve Clara Ann Fowler and transformed her into Patti Page, a totally different person, and how Fowler seemed to regret this in her old age made the show interesting.

The quote that summed up the show was when Fowler said, “a celebrity is not a human, a celebrity is the combination of a human and what the audience wants them to be.”

Another charming thing in the musical was how Tennessee Waltz (the only Page song I knew) echoed through the show.