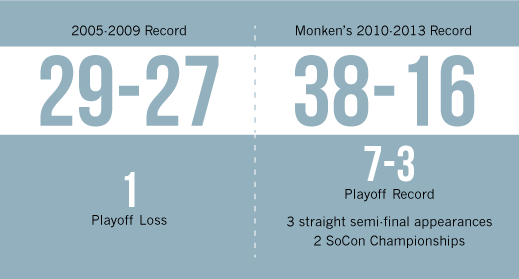 After four seasons with the Eagles, Monken accumulated an impressive 38-16 record and led the Eagles from the Football Championship Subdivision to the Football Bowl Subdivision. In the 2013-2014 season, the Eagles went 7-4, ending their season with an upset victory against SEC powerhouse University of Florida.

Under Monken, GSU had 14 consecutive wins at Allen E. Paulson Stadium, former safety J.J. Wilcox became the highest NFL Draft pick in GSU history after being selected in the third round and in the last three seasons more than 30 team or individual records were either broken or tied.

When Monken was hired as GSU’s head coach, he was not a newcomer to the Eagle nation. Prior to his head coaching position, he had 20 years of assistant coaching experience, five of which he coached running backs for the Eagles.

After he left GSU as the running backs coach, he took an assistant coaching position at the United States Naval Academy, helping them earn five consecutive bowl appearances.

The Eagles are losing the head coach that helped them reach the FBS, which they will be entering next year, but GSU has an important season to focus on, beginning with a matchup against ACC team North Carolina State University.

No replacements have been mentioned for GSU’s head football coach, but on Monday Monken’s new position at West Point will be announced at a news conference.