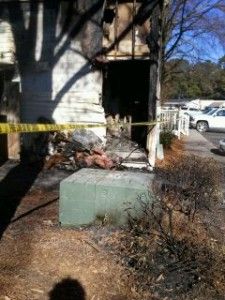 On Dec. 18 at approximately 9:00 a.m. Bulloch County Fire Department responded to an apartment fire in the

Police Cars roadblocked the area from the Parker’s gas station to Subway for approximately an hour and a half to allow the Ambulance and Fire trucks to extinguish the fire.

Officer Chris Colson on the scene stated that they wanted to contain the fire to the small apartment so that the fire wouldn’t spread to the neighboring homes.

No one was injured.

Officers do not know the origin of of the fire but is still under investigation and declined to comment at this time.