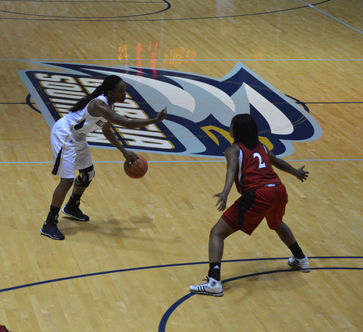 A disappointing start to the 2013 basketball season gives way to the hopes and promise of a successful conference record for the Georgia Southern University women’s basketball team.

The Eagles (1-6) will open up Southern Conference play on Saturday when they take on the Furman University Paladins.

GSU’s record is worse than it appears as the Eagles have played five of their seven games away from Hanner Fieldhouse going 0-5 in those games.

Fortunately, GSU will be at home where it has won twice as many games at home than on the road in the past two years.

The Paladins (3-4) are hitting their stride as they come in with a two-game win streak after beating Yale University and Anderson University 66-61 and 78-67, respectively.

While the Eagles succeed at home, Furman struggles away from home as all of the team’s losses have come on the road by an average margin of defeat of 15 points.

Last season, Furman bested GSU in both games winning by an average margin of 11.5 points and beating the Eagles at Hanner by a score of 56-42.

Freshman guard/forward Holli Wilkins currently leads the Paladins in scoring as she averages 15 points a game along with 5.1 rebounds a game.

Last year Wilkins averaged six points and 4.5 rebounds in the two matchups against the Eagles.

Sophomore forward Brittany Hodges has been the main source of rebounds for Furman as she averages a team-high 7.7 rebounds to go along with 8.5 points and over one block per game.

Hodges averaged 10.5 points and 2.5 blocks in the two games last year against GSU.

GSU has found turnovers to be a major problem as they recorded 37 turnovers in the pair of games it played last year.

This season the Eagles average over 20 turnovers a game, though GSU has cut down turnovers in recent games.

Junior guard Anna Claire Knight has been on a tear this season averaging a team high 14.1 points a game and is shooting 34 percent from three-point land.

The Eagles will tip off at 5 p.m. in Hanner Fieldhouse to start off the 2013 SoCon s chedule.