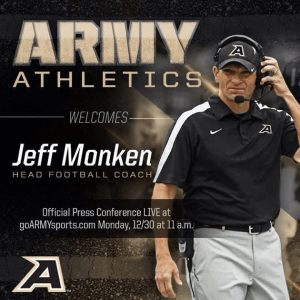 Army Football replaced the front end of their website with this graphic to welcome their new head coach.

“I am thrilled to accept the head coaching position at West Point,” Monken said in a news release. “Not only is the United States Military Academy one of the most prestigious academic institutions in the world, it boasts one of the nation’s richest, most historic traditions in all of college football. I am anxious to get started … meet our players, put our coaching staff in place, and begin preparations for the 2014 football season.”

Monken held a record of 38-16 in his four seasons as the GSU head coach, while making three Football Championship Subdivision semifinal appearances since replacing Chris Hatcher before the 2010 season.

Monken and the GSU program garnered national attention this season with the upset over the University of Florida in Gainesville on Nov. 23, beating the Gators 26-20 without completing a pass.

This is not Monken’s first experience as a coach at one of the service academies. He was a running backs coach at the United States Naval Academy from 2002-2007 under Paul Johnson, another former Eagle head coach.

“I have had the privilege of serving as a coach for several outstanding institutions and am thankful to all of the student-athletes, coaches, and administrators with whom I have worked,” Monken said in a news release. “Because of their commitment, dedication, and loyalty, this opportunity to serve at West Point has been afforded to me.”