Attendance on the rise at GSU 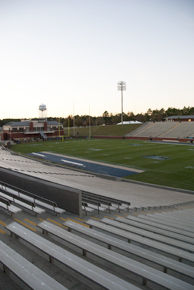 Senior offensive lineman Zach Lonas knows that when his Georgia Southern University football cleats sink into the field, he’s got to have his head in the game and not on the noise of the crowd.

The support of the fans is sometimes able to burst that bubble of concentration.

“It can have a huge impact if you’re playing at home,” Lonas said. “Emotionally, that’s a big upswing having the fans there to support you and everything.”

Athletic Director Thomas Kleinlein said he knows firsthand what kind of impact cheering fans can have on a team.

“I know as a former player, we’re all performers. We like the energy that the crowd gives us,” Kleinlein said. “So when that energy is wild and it’s loud and it’s passionate, it does fuel our players to play better and it does cause some problems for opponents.”

“When you look at the numbers for student attendance across the board there’s a number of factors that affect it. I will tell you that student attendance is down across the entire country right now and not only is it student ticket distribution but it’s kick off times, at many institutions it’s more young people are having to now work in college,” Kleinlein said.

Before the expansion of Allen E. Paulson Stadium, the complex could seat 35,575, according to documents from GSU’s Athletic Department.  There will be 6,200 seats added to the stadium once construction is complete.  The expansion is being funded by a $25 per semester student fee.

Kleinlein has a specific three-point plan of action to make the fan experience at GSU football games better.

“We’ve got to get our coaches and our players more ingrained in our community and out on campus so there’s an identifiable person that they connect with. People tend to root for people they can know and understand,” Kleinlein said.

The other two points in his plan are to utilize the video board that is being added during the expansion to engage fans by splashing them across the screen during game breaks and add a free student-only tailgate area off of Malecki Drive.

With the attempt to lure more fans in, there will be more mouths to feed on game day. That offers an opportunity for a bigger profit on the horizon for GSU, which is much needed when profit from concessions has decreased from $75,179 in 2011 to $53,171 in 2013 at all athletic events.

More games will be televised each season with the conference move, which could help and hurt attendance.

“I think that’s a monster that we all have to deal with. The fact that people can sit at home in the luxury of their house and look at the TV anytime they want,” Kleinlein said. “That’s why fan experience, tailgating, engagement within the game becomes very important.”

But, he said, that’s not a challenge GSU should be worried about.

“I think the thing that we need to understand is that we don’t need to be afraid of that. It’s really one of the reasons why we made the move. We need to allow TV exposure to do the things for our institution that we want which is get more eyeballs on our institution and more people across the country see Georgia Southern and the great things we got going on here academically because they’re watching a football game,” Kleinlein said.

Ultimately, Kleinlein said his goal is to fill all 41,775 seats of the newly renovated Paulson Stadium, which could be a challenge since the highest attendance recorded over the past four years was 30,108.