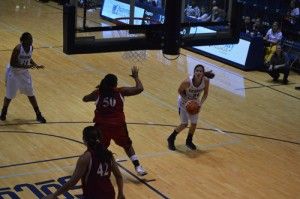 It was a disappointing weekend for the Georgia Southern University women’s basketball team as it fell in two straight games in Boca Raton at the Thanksgiving Tournament.

After their thanksgiving feast on Thursday the Eagles headed down to Florida for their first game against Florida Atlantic University Owls (4-2). FAU had the statistical advantage heading into the game but were aware of the upset possibilities.

The Owls c came out of the gate swinging against GSU and went on an early 12-3 run. Guard Mimi Dubose and forward Danielle Spencer, both seniors, tried to lead their team back but were only able to score five points before the end of the half.  The Eagles found themselves trailing at half time, 19-48.

In the second half it appeared as if a new Eagle team had emerged. Senior guard Lacie Dowling opened the second half with a quick jumper. She was followed up by a three-pointer from Dubose.

After multiple runs the Eagles had battled back but the deficit proved to be too much to overcome and they fell 58-82.

GSU outscored FAU in the second half 38-32, largely led by Dubose who went for 14 points and six assists. Big performances also came from Spencer and junior guard Anna Claire Knight who each racked up 11 points.

Head coach Chris Vozab was pleased with her team’s second half performance.

“In the second half, we slowed ourselves down and executed, and that’s what we need to learn to do consistently moving forward. We want to play with pace and push the ball up the floor, but we cannot allow ourselves to be rushed,” Vozab said in a news release.

The Eagles were hoping to carry the momentum of the second half into their game on Saturday against the University of Detroit.

Dowling started off the game with 14 points and one steal, heading into the half with Detroit up, 42-40.

The second half was another battle for the Eagles. Late in the game Detroit was ahead by one point with only 10 seconds left.

GSU lost possession and was forced to foul. After two free throws Detroit pulled ahead and ran out the clock, taking the game 82-79.

With a long season still to go for the Lady Eagles they look to get their second win Wednesday when they take on Mercer University. The game will be held in Macon at 7 p.m.