Bigshowâ€™s to compete with local bars 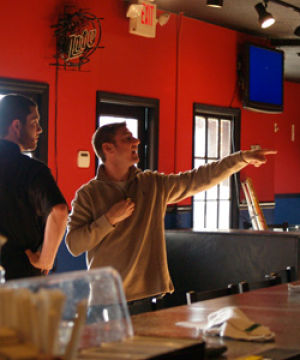 The newest addition to Statesboro’s bar scene opens doors on the eve of finals week with Bigshow’s Burgers second location starting up for business this Friday.

Bigshow’s Burgers is opening its second location across the street from the Allen E. Paulson Stadium, in the location formerly occupied by Dos Primos and most recently The Sports Page.

“I’m trying to get back to the roots of why we opened in the first place,” Heath Robinson, owner of Bigshow’s Burgers, said. “When I thought of the original concept it was meant to be college-oriented. It just so happened that the first location became pretty popular with locals and students, so the new place is meant to cater directly to students.”

The new spot will be open for lunch and dinner seven days a week, including a late-night kitchen. Bigshow’s offers more than 10 different burger options at any given time, with seasonal and weekly specials added to the menu regularly.

“The new location is made almost entirely for the college crowd,” Jordan Steen, manager at Bigshow’s Burgers, said.

“One of the main reasons we’re opening the new place is because we want to join the Statesboro bar scene somewhat,” Steen said.

“One college-oriented location and one local location. That’s what we’ve wanted since six months after we opened originally. We’ve been searching and waiting for a good spot to open up and this is it,” Robinson said.

Bigshow’s new location seats 4.5 times the customers as the original location off Brampton Avenue, offering space for more than 200 people.

“We will be highly competitive with Statesboro’s established bar scene, that’s our goal,” Robinson said.

“I always think about stuff like that [restaurants closing in the location], it’s always a concern,” Robinson said, “But we’re going to focus on what we can control: great food, strong atmosphere, clean environment and good fun.”