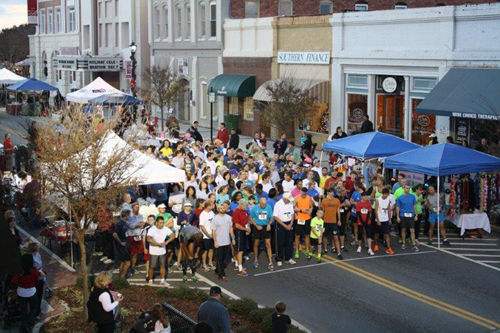 The “Run the ‘Boro” 5k race tomorrow is open to anyone in the Statesboro community or beyond and is part of a larger Christmas Holiday Celebration held in Downtown Statesboro.

The run will begin at 5:30 p.m. and is being hosted by the City of Statesboro, Statesboro Conventions Visitor’s Bureau and the Downtown Statesboro Development Authority.

“Last year was the first year we did the run,” Suzanne Tatum, assistant to the vice president of Government Relations and Community Engagement, said. “We have a lot of people in the community that enjoy doing a five K race. It encourages health and wellness, it’s a stress reliever, it’s the weekend before exams and it’s an opportunity for students to come downtown and get excited for the holiday season and have fun.”

All of the proceeds from the run will be going toward the local charity, Fostering Families Bulloch, as well as the Mayors’ Christmas Motorcade, Tatum said.

“This is our second annual and the race is to raise money for a local charity as well as the Mayors’ Motorcade charity out of Savannah, Georgia,” Jeff Grant, director of Human Resources of the City of Statesboro, said. “There’s a lot of fundraising going on throughout this event. We had between three thousand and four thousand people down there last year. It’s not just a race—the holiday celebration has been going on for years.”

“This is another opportunity for us to get involved with the community and have more representation of the student body,” Green said.

Alongside the race are plenty of events for students, faculty, staff and Bulloch County residents alike to partake in.

“This is a great way to kick off the holiday season,” Tatum said. “We have the Christmas tree lighting ceremony on Thursday and then [Run the ‘Boro] on Friday. There will be a chili cook-off as well as a parade.”

The chili cook-off, the most popular of all the events, will take place across the City Hall. Anyone in attendance will be able to taste an array of homemade chili prepared by contestants and then vote for which one they consider to be the best, Grant said.

“The main goal is to promote the development of our Downtown,” Grant said. “It’s free and fun and an opportunity for the family to enjoy the holidays.”

The race will be the kick-off event for Friday’s festivities and will be followed by the Golf Cart Parade and annual Christmas tree lighting ceremony.

“It’s a way for the students to engage with the City of Statesboro and the Downtown Development Authority,” Tatum said. “It’s a great opportunity for us to join forces with them and help benefit others as well.”

A $25 registration fee is required for those wanting to participate in “Run the ‘Boro” with participants registering through the city of Statesboro website or inside of City Hall. The last day to register is Friday.