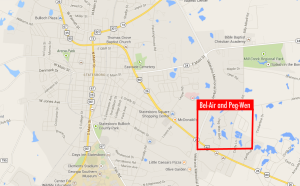 Police have arrested and charged a man they believe is behind the deaths of multiple dogs in Statesboro.

Turner is not a Statesboro resident but has been working in the area doing yard work and other odd jobs, according to a Statesboro Police Department press release.

Turner allegedly left meat laced with poison in yards in the area of Peg-Wen Boulevard and Bel-Air Drive. Statesboro Police believe the poison used was Temik.

Temik is an Aldicarb pesticide used for crops such as cotton, potatoes and peanuts. It is classified as hazardous by the National Occupational Health and Safety Commission.

The incidents began Nov. 10, according to the press release. Detective Ben Purvis investigated the case and was led to Turner after the Bulloch County Sheriff’s Department advised him on Dec. 9 that a domestic dispute they were investigating had given them a tip on the poisoning incidents.