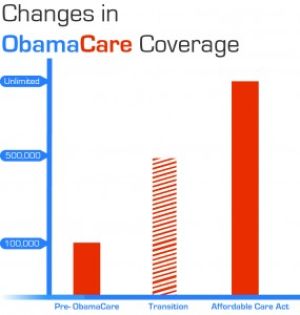 The Affordable Health Care Act, also known as Obamacare, was put in to action Oct. 1 and there are still concerns on how it will affect the nation and students.

“I think the country clearly needs some kind of health care reform and the students who are going to be entering into the marketplace need to know that they are going to be able to get health insurance coverage, and prior to the affordable care act, that wasn’t the case,” Russ Toal, clinical associate professor, said.

One benefit of the bill is that there is no longer a maximum coverage, Jerry Ledlow, Ph.D., professor in the Department of Health Policy and Management, said.

Usually one hundred thousand would be enough but in the event of a catastrophic situation a person needs more healthcare providers will have to cover more, Ferguson said.

There have been some downsides to the implementation of Obamacare that students should take into consideration.

There is no functionality or accessibility to the website, commonly called the Marketplace, where individuals find the right health insurance plan, Ledlow and Toal said.

It is easy to be hacked when using the website at the present time and students are advised to speak with a trusted adult who has experience in the area, Ledlow said.

Students, even if married, are able to stay on their parent’s health insurance until twenty-six years of age, Ledlow, Toal and Ferguson said.

“For all Americans, including students, Obamacare ensures that we have a more complete and comprehensive service insurance coverage,” Toal said.

Enrollment for health insurance must be done by March 31 in order to avoid a penalty that increases each year starting with $95 or one percent of annual income for the first year.

Students need to start filing taxes and insurance even if they don’t think they make enough, either as a dependent or independent, or face the possibility of penalization in the future, Ledlow said.

“The most important piece in the Affordable Care Act is the piece that sticks to attempting to adjust the access issues in terms of expanding coverage and to adjust how we distribute the healthcare resources in terms of beginning to focus on preventive care and primary care,” Ferguson said.

A person’s health condition and income no longer affects whether that person receives insurance, which then allows that person to gain access to preventive care that were previously inaccessible, Toal said.

Cost shifting is when two people want to buy a ten dollar item at Wal-Mart, and one has to pay thirteen dollars and the other person only has to pay seven dollars, either way insurance companies will get the same price, Ledlow said.

Toal said, “I think the benefits are going to significantly outweigh the negatives. We are dealing with a lot of those negatives right now but these things will get cleared away and then people will welcome the changes.”