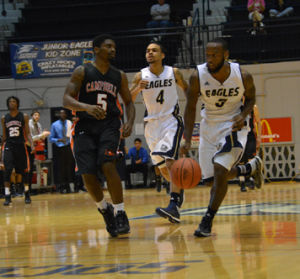 Hewitt averaged 27.7 points per game over the last week. He also shot 46 percent from the field and was 8-23 from beyond the arc, while going 23-31 on his free throw attempts.

Hewitt is playing this season after redshirting all of last season. He started 29 of GSU’s 30 games during his sophomore season and averaged 10.5 points per game in those 30 games.

It is the second time the Miramar, Fla. native has been named SoCon POTW this season, which is only four weeks in.

The game that most likely sealed the honor for Hewitt was GSU’s matchup against Campbell University on Saturday.

Hewitt scored a career-high 38 points in the game and recorded 11 rebounds on his way to his first career double-double. He also became the first Eagle to score at least 30 points in a game since the 2010-2011 season.

The Eagles went on to lose their game against CU 75-73 in overtime. Hewitt scored six of the 11 points GSU recorded in the extra period.

Averaging 24.5 points per game this season, Hewitt leads the team in scoring going into Wednesday’s game against Brewton-Parker College.