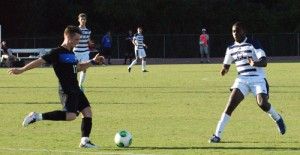 Sophomore forward Emmanuel Raji (17) cuts off an opposing player to stop a pass up the field.Photo by: Heather Yeomans

On the brink of a disappointing season, the Georgia Southern University men’s soccer team scored two key wins at the end of the regular season.

Going into the last week of the regular season, GSU was in last place in the Southern Conference with a 1-4 record and playing one of the toughest games of the season on the road. The Eagles won that game against Furman University in overtime by a score of 2-1.

To close out the regular season, the Eagles would take on James Madison University and win again by the score of 2-1.

The two wins put GSU at 8-9 overall and 2-4 in-conference heading into the SoCon Tournament, which starts on Saturday.

The Eagles received the No. 6 seed and will travel to Greensboro to play against the University of North Carolina at Greensboro.

Both teams met in Greensboro less than two weeks ago, with the Spartans getting the victory with two second-half goals to win 2-1.

This will be the fourth meeting between the two teams in the past two years with GSU winning both games last season by a total score of 6-2.

Also, this is the second straight year that both teams will face off in the first round of the conference tournament.

Although this is a new season, the trends seem eerily similar, as GSU has won four of its last five matches to close the season. Last season, the Eagles won three of the last four to close out the year.

If GSU is able to win against UNCG, it will set up the potential for a SoCon semifinal rematch with Elon University from last year.

The Eagles are riding the wave of solid defense as they have allowed a total of 22 goals on the season while boasting one of the best goalies in the SoCon.

The play of senior forward Witt Carlisle and senior midfielder Hunter Norton, who have combined for 11 goals and seven assists, followed by the added support of freshman forward Jeremy Rector and sophomore forward Eric Dinka make the Eagles a dangerous team.

The Eagles will kick off the 2013 Southern Conference Tournament Saturday at 7 p.m.