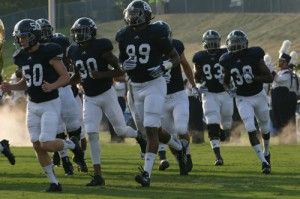 Georgia Southern University athletic director Thomas Kleinlein announced that the Eagles will be facing Western Michigan University at home in 2015 after GSU makes the jump to the Sun Belt Conference.

“I know our fans have been clamoring to know who the first home non-conference FBS opponent would be, and we are pleased to announce this deal with Western Michigan,” Kleinlein said in a news release. “I am very familiar with their program from my time at Kent State and look forward to watching our Eagles face them again.”

The matchup will be GSU’s first non-conference matchup at home at the Football Bowl Subdivision level. The two teams are scheduled for a home-and-home series. The first game will be in Statesboro and the Eagles will travel to Kalamazoo, Mich., to face the Broncos in 2016.

WMU’s football program began play in 1906 and is currently a member of the Mid-American Conference. The Broncos have claimed two MAC titles and have appeared in five bowl games, the most recent being the 2011 Little Caesars Pizza Bowl.