GSU dominates in a Homecoming win 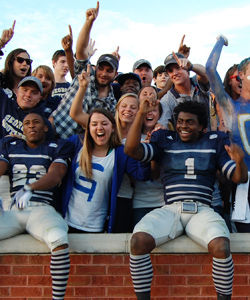 The seniors put on a show as the Georgia Southern University football team cruised to a 35-19 victory over the Western Carolina University Catamounts.

The team came out firing on all cylinders in front of a Homecoming crowd that witnessed the Eagles’ last home game at the Football Championship Series level. On the second play from scrimmage, senior cornerback Lavelle Westbrooks intercepted a pass and set GSU up with the ball on the WCU 38 yard line.

Senior quarterback Jerick McKinnon would put the Eagles on the board first with a 23-yard touchdown run.  McKinnon faked the pitch and burst up the right side line for the first of his two rushing touchdowns on the day.

“We knew they were going to try to slow-play the pitch and run to the pitch late,” McKinnon said.  “Watching film all week we knew some tips on what they might do.”

McKinnon was one of several seniors to have a big day in his last game at Allen E. Paulson Stadium.  Senior linebacker Kyle Oehlbeck had a career-high 14 tackles, while Westbrooks caught two interceptions and tipped another one to sophomore safety Matt Dobson.

Dobson had his best day of the season in making the first two interceptions of his career.  The Eagles picked off four passes from two different WCU quarterbacks on their way to the team’s first win in its last three games.

“We’ve struggled against the pass a little bit this year, but we had a great game plan this week and came out and executed,” Dobson said.  “It was the seniors last time here at Paulson and we just wanted to put them out on a high note.”

The Eagles kept reigning Southern Conference Freshman of the Week Garry Lewis bottled up with only nine yards rushing.  They also forced a season-high four turnovers and held WCU to 271 yards of total offense.

“We took advantage in the first half of a couple of turnovers and we really have not gotten enough of those this year,” head coach Jeff Monken said.  “Those really made a big difference and we made them count.”

With the game in hand, Monken put McKinnon back in the game to kneel on the ball and run out the clock.  McKinnon took the last snap in the final SoCon home game for the Eagles from the victory formation.

Monken said, “I think it was just appropriate to send him out there and let him take the last snap.  He has done a lot for our program.”

GSU will travel to Elon University in search of a second straight win on Nov. 16.  Kickoff is scheduled for 3 p.m.