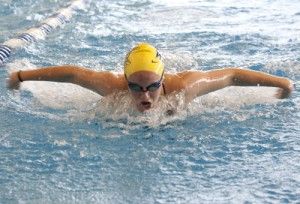 Georgia Southern University’s diving team was in North Carolina Thursday and Friday at the Dowd Nike Cup while the swim team competed close by at the Wingate Fall Frenzy Friday through Sunday.

The highest finish on day one at the Dowd Nike Cup was the 11th place finish in the 1-meter dive by senior Sara Meisenhelder whose final score was 239.25.  Senior Amanda Macchio’s 14th place finish was closely followed by sophomore Emma Weisel’s 15th finish and junior Brittany Swanson’s 17th finish.

Day two of the Cup brought in an even higher finish from Meisenhelder who took eighth place in the A-Final with a score of 251.75.  The B-Finals resulted in a 16thplace finish for Macchio, 18th for Weisel and 19th for Swanson on the final day of the Cup.

“I think [the diving team] did very well,” diving coach David Giambra said. “We faced the toughest competition we’ll face all year.  They did some really good dives and there’s just some things we need to work on a little bit.”

At the Wingate Fall Frenzy, the Eagles swam to a fourth place finish out of 12 teams with a score of 1030.5.

Contributing to the fourth place finish, the Eagles had swimmers to finish in top 10 and top five positions.

On day one, the Eagles landed a ninth place finish with a time of 1:40.36 in the 200 Freestyle Relay which sophomore Christina Moran, junior Megan Heller, senior Devan White and junior Elaina Lanson swam.  In the third event, the 500 Freestyle, junior Amber Juncker had a time of 5:05.68, which landed her in fifth place position.

The Eagles had two top 10 finishers in the 50 Freestyle and swimmers in the A, B and C-Finals.  Lanson took the third place finish with a time of 23.90 and Moran finished 10th place with a time of 24.56.  Moran, Heller, Lanson and senior Megan Ostrom took sixth place in the 400 Medley Relay with a time of 3:56.52.

“I thought we finished well which definitely indicates that we are a fit, tough team,” Kellogg said. “I think that holds well for us going forward.”

The swimming and diving teams next competition will be on Saturday Jan. 11 in Ashville, N.C.