GSU makes history at The Swamp 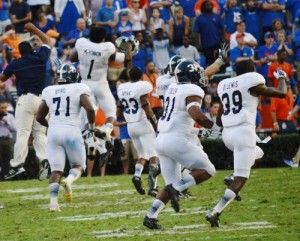 In a nail-biter that would turn out to be one of the biggest wins in program history, the Georgia Southern University football team defeated the University of Florida 26-20.

The monumental upset in “The Swamp” was the Eagles’ first win ever against a Football Bowl Subdivision team and the sixth loss in a row for the Gators.

Coming into the game both teams resembled the walking wounded with injuries up and down their rosters, but seniors like running back Jerick McKinnon, fullback William Banks and linebacker Kyle Oehlbeck provided the fire GSU needed to end the season in historical fashion.

Oehlebck was all over the field in the first half and the Gainesville native had a little extra motivation for the last game of his college career.  Playing in front of his loved ones Oehlbeck had seven first half tackles against a team that did not give him a look coming out of high school.

The Eagles could have folded early after the Gators jumped out to 10-0 lead, but the team stuck to the game plan and began to find success in the running game.  GSU would rack up 429 rushing yards, the fourth most surrendered by the Gators in school history.

The Eagles would get on the board in the second quarter after the defense forced a three and out.  On the first play of the ensuing drive, redshirt freshman quarterback Kevin Ellison split the UF defense and turned on the jets for a 45 yard touchdown run.  Ellison had 118 rushing yards and two touchdowns on the biggest stage GSU has played on this season.

“Coach told us before the game we need to just block out the fans and everything else and just focus on Georgia Southern football,” Ellison said.

GSU football is the triple option and the Eagles won their 10th game in school history without completing a pass.  GSU is 10-0 in such contests.

McKinnon, who put his stamp on the program in his final game with 125 yards and the game winning touchdown, battled through injuries to provide some explosive plays for GSU.  McKinnon tweaked an ankle injury early but returned later and left everything he had on the field.

“I don’t know if we would have won as many football games as we did the last four years if he wasn’t on our football team,” Monken said.  “He has always been such a positive kid, the leadership when he’s in the huddle and how much confidence there is with the other guys out there when he is in the huddle.  We’re going to miss him.”

The Eagles were four touchdown underdogs but on Saturday they proved to be the superior team.  GSU gained 150 more yards than UF despite the Gators having home field advantage and forcing three turnovers.

Monken said, “If you said who is going to win, Georgia Southern or Florida? There would probably be a lot more people that picked Florida today and that’s just the truth of it.”