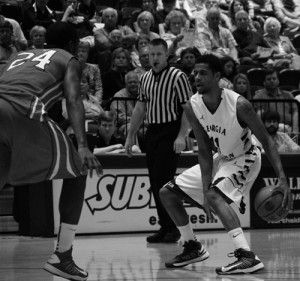 It was a display of dominance from the Georgia Southern University men’s basketball team as they defeated Toccoa Falls University 104-50 for their second win of the season.

The game featured a huge performance from senior forward Tre Bussey, who boasted 29 points and nine rebounds. Bussey ended the night sinking 11-13 field goals and went seven for nine from beyond the arch.

The entire team had a solid night statistically. On defense, the Eagles grabbed 29 defensive boards and 20 steals. Toccoa Falls did not lead at any point in the contest.

Offensively, the team made it easier on themselves by allowing only eight turnovers. Off the bench the Eagles had 34 points, along with 20 fast break points.

The men’s basketball team will travel to Morgantown, W.V. Thursday to take on the West Virginia University Mountaineers.