DJ Nino: An Inside Look at One of Statesboro’s Most Well-Known Performers 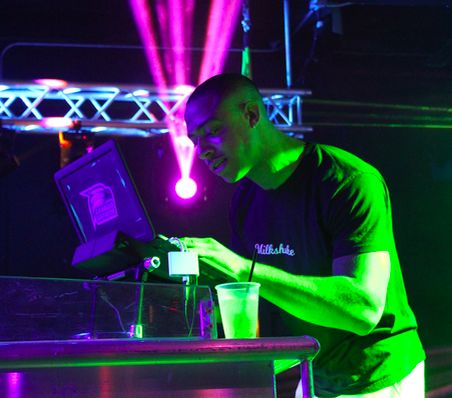 One of the most important parts of a college town is the entertainment available when students want to take a break from responsibilities and have some fun. For anyone who has been to the Blue Room, one of the hottest spots in town, the name DJ Nino is well known.

The elusive DJ, a Denmark native, was raised in Stone Mountain, Georgia. He performs every weekend at the Blue Room to a crowd of excited listeners. He has been DJing since 2013.

Nino was exposed to many different kinds of music since he was a child.

“My mom has always been open to all types of music,” Nino said. “Whenever I was younger riding in the car with her, it could be Lenny Kravitz, Kid Rock, Run DMC. It could be anything.”

As Nino got older, he found he had a natural talent for putting together music and making playlists that people love.

“Being an athlete in high school, music would pump us up in the gym and then from there I found this website and just started messing around with it on my computer, and that’s how I really got a feel for it,” Nino said. “And all my teammates were loving it, so I really just went from there.”

Before getting a regular gig in town, Nino performed some other places around town like Shenanigans. He also opened for Migos in their 2015 concert in Statesboro. Additionally, Nino performs in Atlanta and Alabama.

When asked about challenges faced since the start of his career, Nino discussed the racism he has encountered.

Nino says that the racism he’s encountered has gotten better over time.

“It has now gotten a hundred times better,” Nino said. “That was in the beginning. That was when the Plaza was a thing.”

DJ Nino performs most often in the Blue Room of Statesboro. He has performed there almost every weekend since the club opened in August 2018.

One of the owners, William Bridwell, said Nino contributes to the inner workings of the bar and certain things he does allow things to run smoothly.

“He is a very intelligent DJ,” Bridwell said. “I think when most people think of a DJ, they think of a person just getting up there and playing a playlist. But, in my opinion, I think there are so many different aspects to entertainment and nightlife.”

An example Bridwell gave was Nino’s ability to read a crowd. “If he’s playing a certain genre and the crowd isn’t responding, he can tell that he’s not moving the big crowds in the back to the dance floor, so he’ll change it up.”

Nino’s value to the Blue Room goes beyond what the crowd may see. There are a lot more technical aspects that go into making each performance possible.

“In addition to who is performing, we place a high value on the entire scope of what our patrons are watching and our performers and production engineers can definitely read off each other,” Bridwell said. “One the other owners, Al Chapman, has a background in production and lighting so he comes in to run lights most lights. Al and Nino just mesh very well together and play off each other which ultimately in my opinion raises the bar of the whole experience.”

Nino also talked about his experience with owners at some clubs expecting him to play only rap music without appealing to other genres as well.

“I appeal to the crowd, so I never just play one genre,” said Nino.”I actually don’t have a set playlist either, it’s all just off the top of my head. I might start off with ‘I Write Sins Not Tragedies’ and end with ‘Knuck If You Buck.’”

As far as the music itself goes, Nino has learned important things throughout his career.

“What I’ve noticed and what a lot of other people are starting to notice now is that we all listen to the same music.”