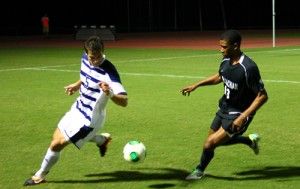 In their last regular season match, the Georgia Southern University men’s soccer team came out on top this afternoon with a score of 2-1 against James Madison University.

The Eagle’s shortly retaliated when senior midfielder Hunter Norton scored just three minutes after for his fifth goal of the season.  Norton received the assist from sophomore defender Reed Norton.  The second goal for the Eagles came in the 55th minute of the game from freshman forward Jeremy Rector.