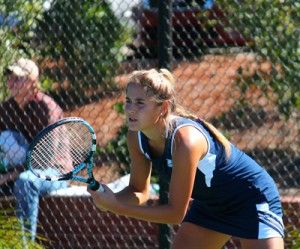 The Georgia Southern University women’s tennis team was able to conclude its fall season with multiple impressive wins this past weekend at the Wofford College’s Terrier Invitational.

When the Eagles traveled to Spartanburg for their last fall tournament they were prepared to win.

“This was a great tournament for us to end on,” head coach Amy Bonner said in a news release. “The team competed so well all weekend and I was excited for them to close out the fall season on a high note.”

Defeating University of North Carolina senior Zoe Hamel (6-3) (6-4) in the first round, Gardner-Webb University junior Yasmin Doost (6-1) (6-3) in the second round and Western Carolina University sophomore Stacia Kissell (6-4) (6-1) in the last round. GSU senior Paola Garrido finished on top in the Gold Singles Flight.

Junior Jordana Klein was also able to attain a few wins when she overcame Presbyterian College senior Courtney Gardiner (6-0) (6-1), and in the final round defeating UNCA sophomore Ericka Rivero (6-1) (6-2) to win her flight.

Sophomore Stephanie Woods was also able to earn herself the title in the Black Singles Flight after she defeated WCU sophomore Nicole Nielly (6-4) (6-4), followed by a triumph over Presbyterian senior Patricia Alves (6-1) (6-2) in the second heat and rounding it out with a win against Mercer University sophomore Danielle Jones (6-1) (6-1).

As far as doubles matches go, the Eagles also had a streak of good luck when Garrido and Woods teamed up to overcome teams from Presbyterian (8-3), UNCA (8-6) and Wofford (8-5) to win their flight. While the pair Klein and senior Caitlin Kitchen had some impressive wins against Presbyterian (8-1), Mercer (8-4), and UNCA (8-3) to bring home the White Doubles Flight title.

“The girls are playing well and most importantly coming together as a team,” Bonner said.

The Eagles will not hit the courts again until Jan. 25, 2014 at home against Stetson University.