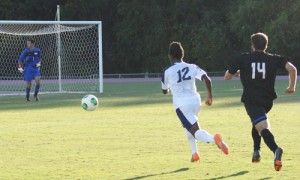 Two times is a charm when it comes to Southern Conference quarterfinal games for the Georgia Southern University men’s soccer team as it defeated University of North Carolina at Greensboro by a score of 1-0.

The Eagles had previously lost in Greensboro, N.C. by a score of 2-1 to the Spartans.

Senior Witt Carlisle scored a team-leading seventh goal of the season in the 65th minute of the game as he scored on a penalty kick.

GSU recorded a fourth shutout as a team this season as senior goalkeeper Neal Bates saved seven shots from UNCG.

The Eagles improve to 9-9 on the season and will continue to pursue first SoCon championship in school history.

GSU will take on Elon University in the conference semifinals for the second straight year in a row.

The Phoenix beat the Eagles 1-0 earlier this season at Elon, however, both teams will meet Friday at a neutral site in Greenville, S.C.