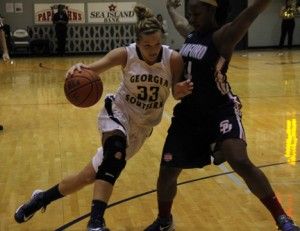 Senior guard MiMi Dubose (33) tries to dribble around an opposing player. Dubose will lead the Eagles into battle against Auburn University Saturday.File photo

The Georgia Southern University women’s basketball team looks to open its season with a bang as it prepares to battle with Auburn University this Saturday.

Last season, the team had a dismal record of 8-23. However, its conference record was good enough to get it a place in the Southern Conference tournament. The Eagles triumphed over Western Carolina University in the first round before being turned away in round two by the University of Tennessee at Chattanooga.

Heading into the 2013-14 season, the Eagles have two All-Southern Conference players taking the court, senior guard Mimi Dubose and junior guard Anna Claire Knight. They return four starters and hope to use this seniority to push them through key games this season.

Dubose played a huge role for GSU last season, averaging 12.4 points and 3.8 rebounds per game. She will face off against junior guard Hasina Muhammad for the Tigers. Muhammad averaged 14 points per game and 5.1 rebounds last season.

Leading the Eagles in rebounds, with 5.7 per game, Knight is prepared to have a big night, as she will be matched up with senior guard/forward Tyrese Tanner. Tanner was the cornerstone of the Tigers last season, blocking 38 shots and averaging 14.2 points per game.

GSU senior forward Danielle Spencer hopes to improve on her solid performance last year, where she led the team in blocks with 16. The senior will have to out-rebound sophomore Tra’Cee Tanner, who averaged only 3.8 rebounds compared to Spencer’s 5.1 rebounds per game.

Head coach Chris Vozab is entering her second season at GSU. In her career as a head coach, she has recorded three 20-win seasons as well as two NCAA tournament appearances.

Auburn had a decent season in 2012, compiling a record of 19-15 and qualifying for the Southeastern Conference Tournament where it was quickly eliminated in a close game against Louisiana State University. They went on to the fourth round of the Women’s National Invitational Tournament and fell to Drexel University.

On paper the Tigers have the advantage, but there is a possibility of an upset. The match up will give the Eagles key experience against a higher-ranked opponent that they will need throughout the season.

The season opener will be played in Auburn at 7 p.m. The first home game of the season for GSU is scheduled for Nov. 16 against Jacksonville State University.