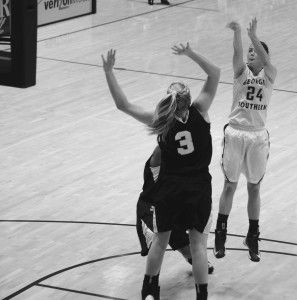 GSU will look to turn the loss around and get back on track as it takes on another Southeastern Conference foe in the University of Kentucky tomorrow.

The Eagles hope playing against big opponents can provide valuable experience for when the team gets into the latter parts of the season.

Senior All-SoCon guard MiMi Dubose who is currently leading the team averaging 15 points and five assists per game is the offensive catalyst for GSU.

In the season opener the Eagles struggled with turnovers as they committed 16 of them, with 12 coming in the first half.

“We know they want to force turnovers with their (the UK) press,” head coach Chris Vozab said.

The Wildcats are currently forcing their opponents to turnover the ball 24 times a game.

KU sits high atop the national rankings coming in ranked at No. 7 in the country.

They have gotten off to a hot start already with two wins over Wagner University and Marist University by an average margin of 26.5 points.

KU features multiple threats as four players are averaging over 10 points a contest.

Senior forward DeNesha Stallworth heads up the bunch as she is the teams scoring leader with 13.5 points a game, along with a team-leading two steals a game and eight rebounds.

Sophomore guard Janee Thompson runs the offense as she leads the team with five assists per game and has a 3-1 assist to turnover ratio.

Eagle sophomore forward Briana Jones will most likely have to match up against Stallworth. Jones is averaging almost a double-double as she comes in with 10 points and nine rebounds a contest.

Collectively, GSU will need to play solid, turnover-free basketball in a very tough environment to pull this off.  It is very early in the season and the Eagles are still putting the pieces together to find a winning formula.

The game will tip off tomorrow at 11 a.m. in Lexington.