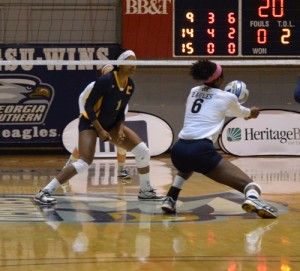 Junior middle Kym Coley (6) slides for the dig against the University of Tennessee at Chattanooga.Photo by: Jessica Stanfield

Coming off a conference victory over The Citadel on Tuesday, the Georgia Southern University volleyball team will take to the road for a faceoff with the Davidson College Wildcats (13-13, 4-8 SoCon).

The Wildcats are coming off a 3-1 victory against the University of Tennessee at Chattanooga last Sunday, which snapped a five-match losing streak. Davidson has won only three of its last 10 games.

Senior outside hitter Caroline Brown will lead Davidson and senior opposite Taylor Pisel on offense. Brown and Pisel have collected 329 and 243 kills, respectively. The duo combined for 26 kills against UTC.

Senior outside hitter Megan Chamberlin led the team against the Mocs, racking up 19 kills and 15 digs.  The Wildcats’ defense is anchored by junior libero Anastasia Owen, sporting 4.22 digs per set and freshman middle Emily Franklin, who has tallied 102 blocks.

The Eagles will counter with the onslaught of junior outside hitter Jamie DeRatt, sophomore right side Katie Bange, senior outside hitter Nicole Jeschelnik and junior middle Kym Coley. These four Eagles have amassed 1,073 kills and 1,222.5 points total this season.

Sophomore outside hitter Christina Vereb is also coming off the best outing of her career, after racking up 15 kills and 10 digs last Tuesday against The Citadel.

The Eagle defense that will be tasked with stopping Brown and Pisel will be led by Curry, who has tallied 107 total blocks and sophomore libero Alexandra Beecher, averaging 4.57 digs a set.

The Eagles have won their last 10 matches against Davidson, dating back to 2007.  The Eagles have utterly dominated Davidson during the streak, outscoring the Wildcats 770-590 and going 30-3 in sets.

After this weekend, the Eagles will have two remaining games against Western Carolina University and Appalachian State University at home before the conference tournament begins.

The match versus the Wildcats is set to take place Saturday at 2 p.m. in Davidson.