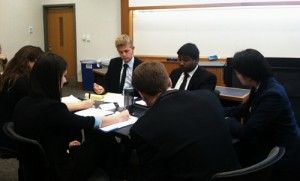 The event took place Oct. 4 and 5 and was hosted by Brenau University in Gainesville, Ga.

Mediation allows a third, impartial party to help two groups resolve a conflict. Mediation is one of the forms available for conflict resolution and allows the two arguing parties to negotiate and speak through a mediator.

“As an assistant professor of criminal justice and criminology, I thought that my presence as the advisor for this club could draw attention to the great value of mediation as a way to solve problems not just for students in our major but for Georgia Southern University students campus-wide as well,” Laura Agnich, Ph.D., Mock Mediation club advisor, said.

Dylan John, a junior construction management major, created the club at the beginning of the semester, gaining support from both Jacek Lubecki, Ph.D., associate professor and director of the Center for International Studies, and Agnich.

Mikkel Ryrose, Jonathon Quintyne and Dylan John attended the International Mock Mediation Tournament in Des Moines, Iowa on Nov. 1, a tournament they were invited to attend last-minute. Any kind of high ranking was not expected and came as a pleasant surprise when the team finished with eighth place out of the 42 competing teams.

“I’ve been doing this for three years now. I was formerly a student coach for Middle Georgia State College and in two years we still didn’t get to where we are in one semester here at GSU. I was quite amazed that we made that stride,” John said.

Judges base the winners off of several factors, such as how well the mediators work together, attitude about the situation, appropriate questions being asked at appropriate times, if the mediators have the trust of their clients and whether or not confidentiality is maintained.

In competition, six people participate on four teams: the advocate/client pair, the plaintiff and defendant and two mediators. While from opposing teams, mediators must work together to resolve the fictitious conflict.

“I worked at a shelter for victims of intimate partner violence while I was an undergraduate student in Virginia and saw firsthand some of the benefits of mediation practices,” Agnich said.

The most prestigious award, the Elizabeth S. Baumgardner Peacemaker Award, gets its status from needing to be nominated by the opposing team. This honor was awarded to the president and captain of the Mock Mediation Club, Dylan John, for his abilities during the competition.

“We have a team of ten people right now and over the weekend we trained for over twenty hours for the tournament in Iowa and it seemed to have worked,” John said.

In the future, the team is hoping to participate in more tournaments at the regional, national and international levels as well as hosting their own tournaments.