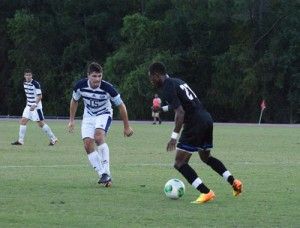 History repeated itself as the Georgia Southern University men’s soccer team dropped the University of North Carolina at Greensboro by a score of 1-0.

For the second straight year, the Eagles took on the Spartans in the opening round of the Southern Conference Tournament and once again came away the victor.

GSU and UNCG faced off earlier in the regular season in the same venue. In that matchup the Spartans got the best of the Eagles by a score of 2-1.

The Eagles broke the nil-nil deadlock in the 65th minute when senior forward Witt Carlisle stepped up to take a penalty kick and buried it for a team-leading seventh goal of the season.

“It’s tournament time,” GSU head coach K evin Kennedy said. “There was a lot of pressure on the guys, but credit to them. They saw it as an opportunity tonight to go out, play loose and get a big result.”

The Eagles defense recorded the team’s fourth shutout of the season and third on the road.

“Getting the win was the goal, but the clean sheet was icing on the cake. It really is a testament to how well [senior goalkeeper] Neal Bates has played for us this season,” Kennedy said.

Bates bounced back this matchup as he recorded seven saves while facing 16 shots from the Spartans.

The Eagles will have almost a week until they take on Elon University in a 2012 semifinal rematch on Friday.

GSU is the sixth seed in the conference tournament and will take on the No. 2 seed Elon in Greensville.

The Phoenix are coming off a close win in the opening round as they had to defeat No. 7 seed Appalachian State University in penalty kicks by a score of 8-7.

The Eagles lost to Elon by a score of 1-0 on the road, however, this matchup will be played at a neutral site where both teams have had success.

GSU is 1-0 at neutral sites while Elon is 3-0-1. Both teams have played close games in recent history with the Phoenix winning the last three by an average margin of one goal.

GSU will look to continue its quest for the program’s first conference championship on Friday as they play the first of two semifinal games starting at 5:30 p.m.