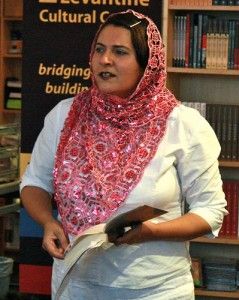 Students sat quietly tonight as they listened to Mohja Kahf tell stories of women in non-violent peace movements in Syria.

Starting at 5 p.m., the Georgia Southern University Arabic Club and The Center for International Studies hosted the event and brought a large group of students into the Russell Union Ballroom.

The author, poet and professor focused her lecture on the “Brides of Freedom March” and the “Stop the Violence Campaign” which are two distant groups of the Syrian Revolution and the female leaders within them.

“I think her presentation was good to bring to campus because the United States largely overlooked and continues to misinterpret exactly what is going on in Syria and this was a great way to help students become more aware,” Victoria Suzzo, senior writing & linguistics major, said.

Videos of the individual movement were shown that depicted scenes of the revolution and showed the peaceful resistance of Syrian women.

It ended with a question and answer session where Kahf advocated non-violence in Syria.

Nadia Dreid, junior journalism major, said, “I am definitely happy that she came. I have read her book ‘The Girl in the Tangerine Scarf’ and I understand the importance of non-violence but it is hard to completely dismiss the fact that armed retaliation can and has worked before.”