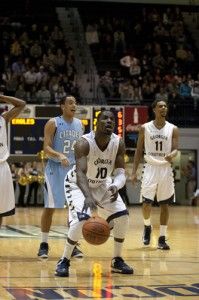 Head coach Mark Byington stressed that character in an athlete is what he looks for most during yesterday's walk-on tryouts.File photo

Georgia Southern University men’s basketball avoided getting swept in the Cancun Challenge by defeating Presbyterian College 78-64 in the team’s final game of the tournament earlire today.

The Eagles trio of guards, junior Jelani Hewitt, senior Tre Bussey and junior Curtis Diamond, combined to score 67 of the team’s 78 points en route to improving their record to 3-4. Hewitt finished with 26, Bussey with 21 and Diamond with 20.

Hewitt came into the game leading the team in scoring, averaging 22 points per game. His willingness to drive to the basket and force the other team to foul is what makes him effective as a scorer. He was 5-9 from the line and while that is not a superb free-throw percentage, his nine attempts were more than Presbyterian’s entire team. The Blue Hose were 4-7 from the line.

Bussey was right behind Hewitt in scoring, averaging 21.5 points per game before today and Diamond’s 20 points is a season-high for him.

Angel Matias and Marvin Baynham dominated the boards for the Eagles, pulling down 17 of the team’s 38 rebounds.

This was GSU’s first road win of the season.

GSU will host Campbell University on Saturday at 7 p.m. in Hanner Fieldhouse. The Camels will travel to Statesboro with a 3-3 record, with one of its wins coming against Appalachian State University.