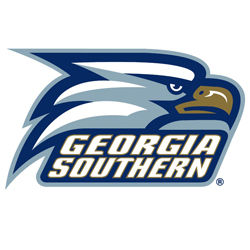 The Georgia Southern University football team easily dispatched Elon University 38-20 in the team’s last game as a member of the Southern Conference.

GSU rode redshirt freshmans Kevin Ellison and Irving Huggins to victory with senior quarterback Jerick McKinnon sitting this one out.

Huggins had the best game of his career with three rushing touchdowns, and he was the first Eagle to do that since senior fullback William Banks did it against Saint Francis University.

Ellison had 163 rushing yards and two touchdowns to go along with 104 passing yards.

The win pushed the Eagles record to 6-4 with only one game left this season.

GSU came out in the third with a good offensive rhythm thanks to redshirt freshman quarterback Kevin Ellison.  Ellison led the Eagles on a 75 yard drive capped off by redshirt freshman fullback Irving Huggins second touchdown of the day.

On the drive Ellison hit senior slot Johnathan Bryant on slant and Bryant gained 35 yards before getting tackled from behind.

Ellison would lead GSU on a 68 yard drive late in the third to put the Eagles ahead 31-6.  On first and goal Ellison punched the ball in from six yards out for his second rushing touchdown of the game.

Elon showed some fight and with 40 seconds left in the third quarter junior quarterback Mike Quinn found junior wide receiver Kierre Brown behind the defense for a touchdown.  The touchdown pass made the score 31-13.

The Eagles used the running game to take control of the game in the second quarter.  Sophomore fullback Nardo Govan and redshirt freshman fullback Irving Huggins combined for over 80 yards in the quarter, including a two yard touchdown run from Huggins.

Up 14-6 redshirt freshman Kevin Ellison broke a couple of tackles in the midst of a 56 yard run.  With GSU threatening from the 30 yard line the Elon defense clamped down and sacked Ellison.

Freshman kicker Younghoe Koo would come on and drill the longest kick of his career from 49 yards out.  GSU went into the locker room up 17-6.

The Georgia Southern University football team came out sluggish in the first quarter and fell behind 6-0 to Elon University.

Elon junior running back Karl Bostic took a handoff and found some space for a 55 yard run.  The run help set up the second field goal drive of the game for the Phoenix.

With his team down by six, GSU redshirt freshman quarterback Kevin Ellison outran the Elon defense around the right side and sprinted 53 yards to the end zone.  The run tied his career long and put GSU ahead 7-6.