Student voting potential not yet realized 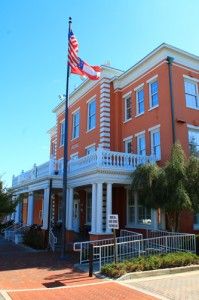 Statesboro City Hall is the home to the city council and mayor positions. The next mayor of Statesboro will be decided next month in a runoff election.Photo by: Ryan Woodham

Elections for City of Statesboro mayor ended Tuesday but because neither candidate received greater than 50 percent of the votes, a runoff election between Jonathan McCollar and Jan Moore will be held to determine the next mayor of Statesboro.

“I think it’s very important when we make sure whoever sits in that office understands the important role Georgia Southern plays in the community and that marriage continues,” Brooks Keel, Ph.D., university president, said.

Georgia Southern University students have the opportunity to play a larger role in the Statesboro community by participating in local elections as voters.

“I think students not only have every right, but every obligation to be involved in local politics,” Keel said. “Our students live here, this is your home for four years, and I think it’s very, very important that your voice be heard and that you exercise your right to influence the community in which you live.”

Sometimes students take the government’s impact on them for granted, Keel said.

The mayor and city council influence the types of businesses that comes into the community and, as a result, to GSU.

An example of this influence is shown in the grant of $500,000 towards the new Shooting Sports Education Center.

“I think the city understands the important economic role the shooting sports education center is going to provide, and that’s one of the reasons why we’re excited about it,” Keel said.

Things like traffic patterns, crosswalks and traffic lights around the community are also controlled by the city council and affect students everyday.

According to the Georgia Voter Registration website, college students can obtain Georgia voter registration forms from their school registrar’s office or from the office of Vice President of Academic Affairs.

“Statesboro is our community and I do not see any reason why students shouldn’t vote,” Katie Maynard, freshmen criminal justice major, said.

It is important for students to vote because a large number of students pay taxes in Statesboro and support the community financially, Cliff Padgett, junior logistics and marketing major, said.

“As [community] members, we are responsible for the actions of our local community and should take interest in the laws and regulations placed upon it,” Patrick Meehan, senior computer science major, said.

Other students recognize the importance of voting in the community, but did not think that the candidates did enough to connect with students.

“I would vote here but I don’t know enough about the candidates to vote,” Payton Fritch, senior public relations major, said. “I feel like the candidates don’t reach out enough to us as students.”

“I think it’s important to be involved locally but I am registered to vote back home and still consider that my home,” Caroline Greene, senior child and family development major, said.

The runoff election will be held on Dec. 3.

Shelby Farmer contributed to this report.