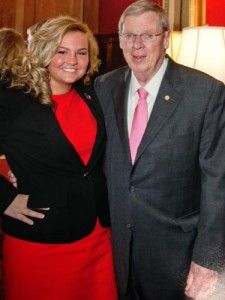 Amber Montrose, senior French major and Eagles in D.C. participant, is an intern for Senator Johnny Isakson (R-GA) through the Eagles in D.C. legislative program.

“Two years ago if you had ever told me that I would be doing an internship in D.C. and super-interested in politics, that this would be the route my life would be taking, I never would have believed you,” Montrose said.

Montrose became interested in politics her junior year when she took an Introduction to American Government class, a class she had been dreading for years.

“It really opened my mind to what it means to be United States citizen and a global citizen, and someone who takes pride and keeping their community in mind when I make life decisions,” Montrose said.

After attending President Obama’s second inauguration and listening to a panel of GSU alum that work at and near the U.S. Capitol, Montrose applied for the Eagles in D.C. Program.

“It is her aspiration to be in public service, so she is very much interested in the political side and kind of getting that experience in D.C. you’re going to see the good, the bad, and the ugly, all of it,” Todd Deal, Ph.D., director for the Office of Student Leadership and Civic Engagement, said.

“So anything that she could be involved in where she could give back to other people, she’s done that on campus. And I think that is the draw for her to do this in D.C, it’s an opportunity for her to see even a bigger picture things that go on and be a part of that and be an agent of change,” Lynn Reaves, senior administrative assistant for the Office of Student Leadership and Civic Engagement, said.

Montrose specializes in the Farm Bill, a controversial bill up for reauthorization that includes food stamp benefits and the insurance protection of small farmers and larger farm business operations.

The House of Representatives wishes to cut the budget for the Farm Bill by $40.1 billion and the Senate wants to cut $4 billion, Montrose said.

Montrose lives a block from the U.S. Capitol and has been able to engage in one-on-one conversations with former presidential candidate Senator John McCain and other important political figures.

Since being at the Capital, Montrose has witnessed the government shutdown and the deliberations on Syria.

Montrose plans on attending law school after graduation and after hopes to work for the state government for at least a few years.

Montrose said, “It’s been a really cool world to get to get a peek into and I think my internship has been unique in letting me really feel like I’m making a difference.”