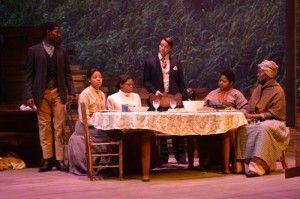 The Theatre and Performance Department at Georgia Southern University plans to take students on a touching journey through time with its upcoming play “Flyin’ West.”

The play will open tomorrow and will run until next Wednesday. Performances will be in the Center for Arts and Theatre’s Black Box Theatre.  All shows begin at 7:30 p.m. with a special matinee performance at 2:00 p.m. on Sunday. Tickets for students and youth are $5 at the door, and faculty, staff and community tickets will be $10.

The play is set in the all black town of Nicodemus, Kan. in 1898. The story revolves around the lives of four sisters: two former slaves and two who have been free their entire lives.

The women live in the free state of Kansas with the hope that all will be well. However, they soon find out that even after the civil war is over their new surroundings are not free of trouble and danger.

Atlanta playwright Pearl Cleage shaped the fictional drama around the complications and causes of the Homestead Act, the Emancipation Proclamation and the 13th Amendment to the U.S. Constitution.

Cleage has written several novels and plays, most of which have either won awards or have been on the New York Times bestseller list. “Flyin’ West” received top honors at the Black Theatre Alliance Award in 1997.

The theatre department will introduce a creative set.

“The set offers a mixture of abstract and realism.  My hope is that the set draws you in to the play,” Patrick Galletta, junior fashion and marketing major and set designer, said.

The play wants to take students on a surreal journey.

“It is very dynamic. The play is a beautiful work of art with just the right amount of comedy and suspense,” Khadijah Carter, sophomore communication arts major and the actress playing Fannie Mae Dov, the middle sister, said.

Georgia Theatre Conference Hall of Fame director Emeritus Mical Whitaker directs the play. Whitaker was once a professor at GSU and is returning to direct the play.

“The play is an overall masterpiece. It contains drama, excitement, and love. I am enthusiastic about returning to GSU and having the opportunity to direct this play,” Whitaker said.

Although retired from GSU, Whitaker is the director of the Youth Theatre Program at the Averitt Center of the Arts in downtown Statesboro and is a frequent guest lecturer and director with GSU’s Theatre and Performance Department.

Whitaker said, “I urge you all to come join us and witness a part of history. We have a lot of talent and I know the story will touch you. I hope viewers will enjoy the play as much as I will.”