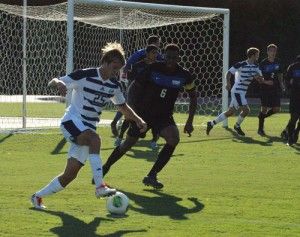 As fate would have it, the Georgia Southern University men’s soccer team was defeated once again by Elon University in the semifinals of the Southern Conference tournament by a score of 5-1.

After a disappointing start to the season the Eagles were coming on strong, winning four of the last five matches that they played including an overtime upset on the road against Furman University.

GSU entered the SoCon tournament with the sixth seed after a 2-4 conference record.

The Eagles would win in the quarterfinal matchup against University of North Carolina at Greensboro after senior forward Witt Carlisle scored a second half penalty to propel GSU to a 1-0 win.

GSU would take on the second-seeded Phoenix looking to avenge a 1-0 loss earlier in the season.

That was not in the plans as Elon overpowered the Eagles with four first-half goals.

The Phoenix poured in 15 shots in the opening frame keeping GSU goalkeeper Neal Bates busy as he recorded five of his eights saves in the first 45 minutes.

“We made some mistakes and they capitalized quickly and put us down two goals. We tried to push back, but it wasn’t our night tonight,” head coach Kevin Kennedy said in a news release.

Elon scored two early goals in the first 15 minutes of the game off a volley from junior forward Jason Waterman that found the head of senior midfielder Matt Wescoe.

The rout was on once sophomore forward Caue Da Silva scored off a long ball from sophomore midfielder James Brace.

The Phoenix would solidify the lead late in the first half as Brace would find a hole in the defense and beat the keeper.

The lone bright spot for the Eagles scoring would be Carlisle as he put GSU on the board in the 86th minute for his team-leading eighth goal of the season.

The Eagles end the season with a second straight conference semifinal appearance and at 9-10 overall.