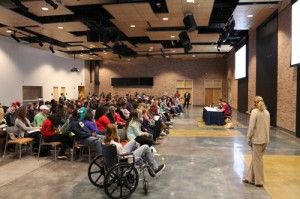 Tuesday night, three Georgia Southern University students gave students and faculty a rare opportunity: a glimpse into the life of someone living with a physical impairment.

The Student Disability Resource Center (SDRC), in conjunction with the Multicultural Student Center (MSC), hosted the third annual Disability Awareness Panel in the Williams Center Multipurpose Room to give students a chance to openly discuss disabilities.

“This was the students’ chance to tell their story,” Jabal Moss, programming graduate assistant with the MSC, said. “For them, it’s giving others a glimpse into their reality.”

Casey Gauthier, sophomore English major, was blindfolded for almost 20 minutes while waiting for the discussion to begin.

“It was kind of disorienting because basically you’re dependent on other people to lead you around and you don’t know exactly where you’re going,” Gauthier said. “I had to automatically trust people to bring me back to the right spot and that they wouldn’t let me run into anything.”

The three panelists then discussed their disabilities and how they have adapted. Students were encouraged to submit questions via Twitter.

Angel Salcedo is a junior middle grades education major who created the discussion panel as a freshman. He has cerebral palsy, a disease that affects muscle movement.

“I can walk, but the muscles in my legs aren’t that strong,” Salcedo said.

Another speaker at the event, Quin Jones, is a forensic accounting major who enjoys playing video games and bowling. He is a junior at GSU and is visually impaired.

Jones’s impairment is worse at night.

“Different shadows sometimes throw off my vision or make me unsure,” Jones said.

Thompson believes that one of the biggest barriers to the disabled community is that people don’t understand disabilities.

“Trying to get people to understand that we are people too is a huge thing that the human community at large knows nothing about,” Thompson said.

“Georgia Southern is mighty lucky to have all three of these individuals as students,” Mike Chambers, administrative director of the SDRC, said.

“Disabilities aren’t just in students in wheelchairs or who are blind, there are all types of disabilities out there that we don’t know about that you cant recognize,” Moss said. “Be careful of jokes that could potentially harm someone who struggles with a disability that you may not know about.”