McKinnon looks back after four years 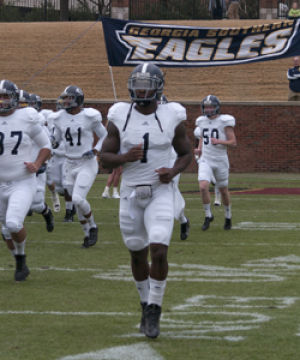 As the seniors were honored two weeks ago with the Senior Day festivities, one senior’s journey through the last four seasons has been marked with success and has set the tone for the team as it moves to the Sun Belt Conference.

Senior quarterback Jerick McKinnon, who was a part of GSU head coach Jeff Monken’s first recruiting class, accounted for three touchdowns in the 35-19 win over Western Carolina University. The win, however great it was, beaconed the end of an era of GSU football. As McKinnon trotted out to take one final kneel-down in Allen E. Paulson Stadium to bring the game clock to zero, he was taking time to reminisce over the last four years and what this game meant.

“Just being able to be part of something historical, with it being the last Southern Conference home game, it was truly special,” McKinnon said. “After the game, as the fourth quarter ended, I talked to some of the guys and we took the time to just look around and soak it all in, and I’m really going to miss playing in this stadium.”

McKinnon’s recruiting process was one that was heavily affected by the change in GSU’s coaching staff, as the transition was being made from former head coach Chris Hatcher to Monken. It was a unique situation in that several coaches, including GSU offensive coordinator Brent Davis and former GSU defensive coordinator Brent Pry, that were recruiting him came together in an unexpected way. Monken from the Georgia Institute of Technology, Davis from the Virginia Military Institute and Pry from the University of Memphis were recruiting McKinnon. This was until the three landed in Statesboro.

“When coach Pry joined the Georgia Southern coaching staff, I began to think this might be the right place,” McKinnon said. “I’ll never forget, it was Martin Luther King Day, Coach Davis, Coach Monken and Coach Pry knocked on my front door. It was unexpected because I didn’t know Monken and Davis were on Georgia Southern’s staff yet. They came in and talked to my parents and after that I went on an official visit.”

McKinnon went on to describe that meeting other future Eagles on his visit, including senior running back Robert Brown, and being welcomed by current players like he was already a part of the team made the decision to become an Eagle that much easier.

When McKinnon came to GSU as a freshman, former quarterback, now-graduate assistant Jaybo Shaw was the starter for the Eagles. Shaw, who was a recent transfer from Georgia Tech, certainly had a reservoir of information to provide McKinnon and he took advantage of the opportunity.

“It was a great freshman year for me. I really just used the opportunity to pick at Jaybo’s brain and further my knowledge of the offense because I had never played in the triple option,” McKinnon said. “He took me in and looked out for me on and off the field and Jaybo and I will always have a special relationship.”

During McKinnon’s tenure at GSU, Eagle fans have been somewhat spoiled with the success the program has seen over the last four seasons. So much so, that McKinnon cannot choose only one favorite moment as an Eagle.

“Certainly beating [Appalachian State University] in 2010, since they were ranked number one in the country, and the playoff run from that season,” McKinnon said. “The [Elon University] game last season played a big role of confirming the identity of our team and it really showed our team character. This season has been just about cherishing every game, but the games against [University of Tennessee at Chattanooga] and The Citadel can’t help but stand out.”

McKinnon may be leaving the GSU roster once the team closes its season out against the University of Florida on Saturday, but McKinnon has helped the young group of quarterbacks, including redshirt freshman Kevin Ellison, to attempt to hit the ground running when the team begins play in the Sun Belt next season.

“All the quarterbacks we have are really good. Just like Jaybo did to me, I’ve taken them under my wing and tried to give them advice on things that will help them out now and in the long run,” McKinnon said. “We have a great group of quarterbacks and right now it looks like Kevin will have the starting job. He does a lot of things well and he’s going to be great for the program.”

With four years and two SoCon titles, it looks like McKinnon has left a bright stamp on the program for years to come. Losing arguably the most versatile and dangerous offensive weapon at the Football Championship Subdivision level the past couple of seasons is a hard thing to overcome, but the Eagles will look to their group of young quarterbacks to lead the team to new horizons in 2014.