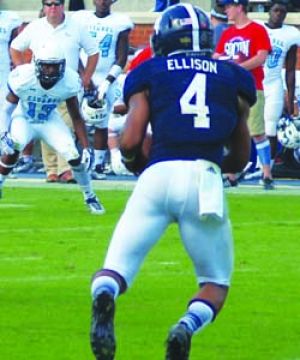 The Georgia Southern University football team will play its last Southern Conference game when the Eagles square off with the Elon University Phoenix on Saturday.

Last year, Elon gave a relatively healthy GSU squad all it could handle and came one fumble in the red zone away from pulling off the upset.  GSU managed to hold on to a 26-23 win thanks to a fourth quarter field goal from sophomore kicker Alex Hanks.

Elon is playing its last home game of the season and will try to send GSU to the Sun Belt Conference on a sour note.

Coming into this year’s matchup, Elon has dropped four straight games including a 35-10 loss to The Citadel at home.  The Eagles avoided a three-game losing streak by winning their Homecoming game 35-19 over Western Carolina University.

In that game GSU managed to pick off a season high four passes.  Elon junior quarterback Mike Quinn, who holds the Southern Conference record with 210 pass attempts between interceptions, tossed three against The Citadel in a lackluster effort.

Elon is 2-8 coming into the game, but the last time GSU faced a struggling rival a 1-6 Appalachian State University blew the Eagles off the field 38-14.

GSU has struggled against teams that can pass the ball, and Elon comes into the game with the third-ranked passing offense in the SoCon.  GSU is also winless on the road this season, but Monken does not plan on reinventing the wheel before the Elon game.

“The plan that we’ve used hasn’t changed since I’ve been here, and we’ve played pretty well on the road in the games that I have been the head coach here,” Monken said.  “I don’t know that it has anything to do with the way we travel or what we eat or the hotel we sleep in, but it is just a matter of playing and executing.”

GSU will get the chance to execute on both sides of the ball once the game starts at 3 p.m.