Tony Award winning musical to perform at the PAC 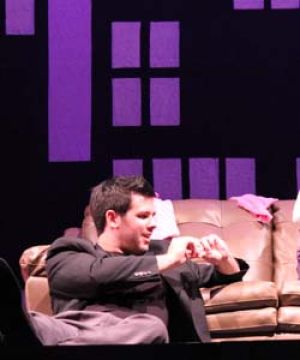 Audiences are invited to be taken on an emotional rollercoaster this weekend as Georgia Southern University’s Opera and the Georgia Southern Symphony bring to life a Sondheim classic: “Company.”

“Company” will be performed Friday and Saturday in the Performing Arts Center. The show will begin at 7:30 p.m. and admission is free with an Eagle ID.

The musical follows the story of Bobby, a young man who struggles with relationships and the concept of marriage. He watches his married friends from the outside as he deals with an internal conflict, whether to get married or not.

“Bobby is a very complicated character.  He is someone who fully believes that he knows and understands what he wants in a relationship, but never really had a good example of a stable, happy marriage so he doesn’t really know anything about them,” Jacob Furse, senior music education major who is playing the lead role of Bobby, said.

“It deals with the issue of commitment, more specifically marriage” Arikka Gregory, assistant professor of voice and “Company” director, said. “What is more frightening: committing yourself to another and living with their wonderful and not-so-wonderful attributes, or journeying through life alone with only impermanent relationships and ‘third-wheel’ dates with your married friends to keep you company?”

The show features many emotional turns as it explores the complexity of relationships.

“I love how each scene in the show makes us laugh out loud at first and then hits us with profoundly thought-provoking situations. I also have been thrilled to watch the students enjoy branching out to explore the more realistic, modern characters of the musical theatre world. In opera, they get a pretty big dose of powdered wigs and tights,” Gregory said.

The musical features an array of colorful characters.

“I am Jenny in the show,” Margaret Alley, a graduate student and actress in “Company,” said. “My favorite moment is at the end of the smoking scene in Jenny and David’s apartment. Even after Jenny goes way out of her comfort zone for her husband and Bobby, she still shows how much she loves her husband. It’s such a short, tender moment that catches me off guard. It blows my mind that she can love her husband that much and show people how much she loves him.”

“The Georgia Southern Opera puts on one production a year that we are lucky enough to hold in our space,” Stacie McDaniel, the house manager at the PAC, said. “I am absolutely excited about seeing ‘Company.’ It’s one of Stephen Sondheim’s best-loved musicals, and it’s recently been revived on Broadway to much acclaim.”

Carolyn Bryan, a music professor and the conductor of “Company” gave some insight into the history of the show.

“The show opened in nineteen seventy but very few things date it – the relationships and Bobby’s journey are timeless. The show was revived on Broadway in nineteen ninety-five. Neil Patrick Harris and several popular actors recently did a concert version of ‘Company’ with the New York Philharmonic; it is on PBS Great Performances this month.” Carolyn Bryan, the conductor of “Company,” said.

The show is known for the way that the music drives the plot.

“Unlike more traditional musicals, the songs are integral to the story. ‘Company’ broke out of the mold of the book musical [something like ‘Oklahoma’ or ‘The Sound of Music’] where the story is complete without the songs. In ‘Company,’ the songs give insight into the characters and help carry the plot,” Bryan said.

McDaniel urges students to take advantage of this opportunity.

McDaniel said, “The thing that I feel like a lot of college students don’t realize is that a college campus is like a small city. There’s plenty of food, music and culture to absorb pretty much every night. And a lot of it, like Georgia Southern University’s production of ‘Company,’ is free to students.”