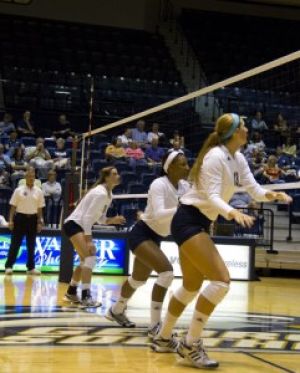 Junior middle Kym Coley led the team with 10 kills, and sophomore right side Katie Bange and junior outside hitter Jamie DeRatt followed with a combined 16 kills.

The Eagles and the Mountaineers were neck and neck in the first set, but back-to-back kills from Coley gave the Eagles a four-point lead at 20-16. Another kill by Coley and one by DeRatt finished the set.

In the third set, GSU managed to keep the Mountaineers to 11 points until an attack by Lauren Gray, but the Eagles took the set, allowing the mountaineers only five more points.

These seniors are not done yet.  They will play their first round of the SoCon tournament along with the rest of the team on Friday in Greenville, S.C.