Under the Influence shows consequences of alcohol 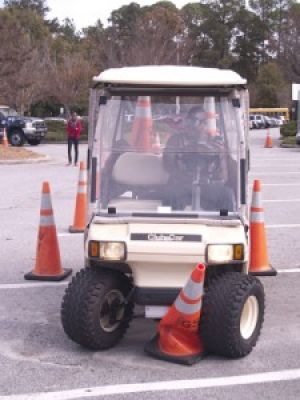 Yesterday, students were able to experience firsthand how driving under the influence and distracted driving not only affects them, but other passengers or pedestrians.

The Office of Public Safety, the Governor’s Office of Highway Safety (GOHS) and the Office of Alcohol and other Drugs organized the first ever Under the Influence event in the Russell Union parking lot.

“We wanted to make something fun and educational as well and [students] can come out and have a good time. If they gain something out of it then we’ve done our job,” Sgt. Tracy Atkinson, assistant coordinator for GOHS, said.

The first demonstration had the objective of driving a golf cart while texting and/or wearing fatal vision goggles.

Distracted driving not only includes texting while driving, but also talking to passengers and tuning the radio or CD player.

The second demonstration tested students’ impaired skills at corn-hole while wearing the goggles.

The third demonstration was the rollover simulator, which showed students the consequences of not properly wearing a seatbelt.

“A rollover simulator simulates a rollover crash. It’s shows you what happens in a rollover crash if a person is not properly belted in a motor vehicle crash,” Cpt. W.L. Hires, coordinator of the Coastal Area Traffic Enforcement Network for the GOHS, said.

“I want to emphasize properly-belted because if you put a belt on improperly that can do just as much damage and be just as fatal as not having one on at all,” Hires said.

The dummies without the seatbelts fell out of the truck headfirst.

“When I think of a crash I think of you going flying through the window, but this one [showed the dummy] going over the driver if you are the passenger,” Maria Renee Altuzar, junior criminal justice major, said.

Hires said that the purpose of a seatbelt is to slow the body’s speed down in the occurrence of a crash and to secure passengers in their seats on impact.

Overall the demonstration proved to be successful in showing students their actions while driving could affect not only themselves, but also others.

“It’s a good experience. It throws you off. It does completely change the way you see everything,” Laena Rodriguez, senior double major in journalism and Spanish, said.

After the demonstrations, Atkinson said that many students take the pledge to never drink and drive or be distracted while driving.

Atkinson said, “We don’t want you just to pledge it, we want you to honestly mean it and to stick to it.”