Eagles gear up for Gators 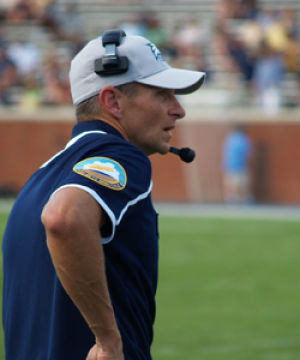 The Georgia Southern University football team is heading to Gainesville on Saturday for its season finale against the struggling University of Florida.

GSU is coming off a 38-20 road win over Elon University last week. The Eagles excelled offensively due to contributions from younger players. Redshirt freshman quarterback Kevin Ellison ran for a career-high 163 yards and two touchdowns, while redshirt freshman running back Irving Huggins scored three touchdowns on the ground.

UF is coming off a 19-14 loss to Southeastern Conference rival University of South Carolina. Gator starting quarterback, redshirt junior Tyler Murphy, did not play due to injury. Redshirt freshman quarterback Skyler Mornhinweg started in Murphy’s place and looks to remain the starter for the contest against the Eagles.

In last week’s game, the Gators played the Gamecocks in a dead-even struggle. UF went into the fourth quarter with a 14-13 lead, but was held scoreless in the quarter while SC took advantage of two successful field goals by freshman kicker Elliot Fry to take the lead and win the game.

The biggest struggle that will be present for the Eagles this weekend will be combatting the Gator defense. UF’s defense is a typical fast SEC defense that moves around the field well and can prevent big plays. It has allowed more than 23 points in a game only twice this season.

Offensively, the Gators have a multitude of weapons at their disposal. Senior wide receivers Trey Burton and Solomon Patton could prove troublesome for the Eagles’ secondary. The pair of UF running backs redshirt junior Mack Brown and freshman Kelvin Taylor, will be an issue that will need to be addressed by GSU’s defense with the play of the inexperienced Mornhinweg under center.

For GSU, it will come down to the play of the young running backs, Huggins and sophomore Nardo Govan, and the play of Ellison and senior Jerick McKinnon. Another big key will be the Eagles’ defense. If the defense can force the young quarterback into making mistakes, GSU can make some noise against the Gators.

This is the season finale for GSU, and the game that will send the current senior class out and propel the team into the Sun Belt Conference in 2014. One cannot think of a game of this magnitude without looking back to the upset of the University of Michigan by Appalachian State University back in 2007, and the Eagles are sure to attempt to repeat that outcome.