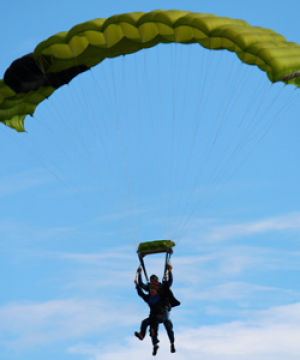 “Welcome to our office,” Kyle Drew, junior mechanical engineering major and founder of Soaring Eagles Skydiving Club, said as he flew 10,000 feet above Statesboro in a Cessna 182, a propeller plane with no chairs except for the pilot’s.

Drew and Travis Alexander, senior construction management majors, see the aerial view of Georgia Southern University, tucked between green and brown patches of farmland, every weekend while skydiving and working at The Jumping Place.

“I was already a skydiver and knew Georgia Tech had a good skydiving club, and I wanted to make one for GSU,” Drew said.

The Soaring Eagles currently has close to 30 members, but only a handful jump on a regular basis.

“A lot of colleges have club teams that go compete on a national level. We are eventually trying to get to that level, but since we just started we are slowly building,” Alexander said. “Our whole purpose for the club is to open up the opportunity for students to come do tandem jumps.”

A tandem jump is a jump done strapped to an instructor that requires no prior training.

Alexander and Drew did not know each other before the club’s formation in January, but now they skydive and work together every weekend from Friday until sundown on Sunday.

“I started packing [parachutes] here in March or April and then I started practicing videography and I found out that’s what I love to do. Now my favorite types of jumps to do are video jumps where I get to be a part of someone’s first skydive,” Alexander said.

“I coach students who are just getting into skydiving to get better, I pack and I just help out,” Drew said.

Erica Pearson, junior international business major and club member, also works at The Jumping Place as a parachute-packer, though she has no prior experience in skydiving.

“It helps if you’re a skydiver but you don’t have to be,” Cathy Kloess, owner of The Jumping Place, said.

Kloess opened up The Jumping Place in Statesboro last September when she moved from St. Mary’s, but has been in business since 2006.

“They say if you do what you love to do you’ll never work a day in your life, and I haven’t,” Kloess said.

“She’s a master rigger, she’s a pilot, a skydiver, an instructor, she’s done it all,” Drew said.

The Jumping Place plans to have a student’s day in the spring when skydiving rates will be discounted for those at GSU.

Students always have a $10 discount at The Jumping Place, and members of the military are given a more significant discount.

Alexander said, “Going up there is something different. Skydiving is one of the hardest things to describe. Everything goes away for that sixty seconds when you’re falling- work problems, week problems, school problems- they all go away.”