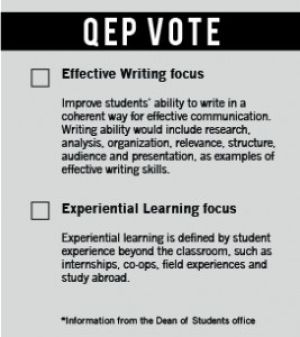 This Friday the QEP committee will close a survey that will impact a facet of GSU students’ education.

The development of a QEP is part of GSU’s reaffirmation process, according to the online survey.

Improving effective writing and improving student learning through experiential learning have emerged through this process and are the two topics proposed for people to vote upon, according to Patrice Jackson, dean of students at GSU.

“Faculty and staff have the highest percentage of participation in the survey thus far, so we really need students to become more active in taking the survey,” Francis said.

According to a message from the Dean of Students Office, the QEP is an opportunity to focus effort on and address institutional issues.

GSU has held six town hall meetings with students, faculty, staff and alumni to determine key issues that could be addressed through a QEP, the survey said.

“This plan started with gathering information on the needs of students, opinions of students at SGA and conversations at faculty senate,” Jackson said. “There is a QEP committee who is responsible for narrowing down these options.”

The two topics were formed from a community-wide survey of students, alumni, faculty and staff, Francis said.

“The letters QEP are not something students hear very often, so I am proud of Georgia Southern that we are engaging our students in this process,” Jackson said.

The QEP committee is aware that students can vote an unlimited amount of times for this survey because they want students’ opinions behind the vote.

Nicholas Anderson, SGA senator for CEIT, proposed the question of whether the survey should be unlimited and available without the use of Eagle ID numbers, and Francis said that the committee is aware of this and continuing with the distribution of the survey as it stands.

“The reason the form was created as such is primarily because it is going out to alumni as well as current students,” Francis said. “It is for such a wide audience that it has to be broad.”

According to Francis, it is important to get a broad range of feedback on the QEP because of its impact on student’s education.

The implementation of FYE has been successful, and the QEP committee hopes to impact student’s education with either choice available, Francis said.

Francis said the new program would be implemented in one year.

Having a quality enhancement plan is a Southern Association of Colleges and Schools (SACS) requirement for all universities under SACS, Jackson said.

“This is about student success,” Jackson said. “We also want to consider what will be most helpful for students’ education not just here at Georgia Southern but beyond graduation.”