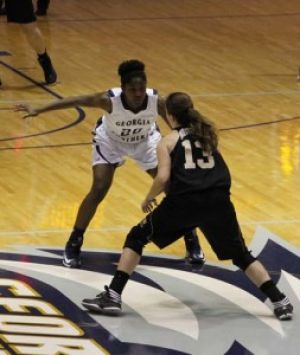 The Georgia Southern University’s women’s basketball team has its first home game coming up against the Jacksonville State University Gamecocks (1-1) this Saturday.

In their last game against the University of Kentucky, the Eagles could not keep up with the No. 7 ranked Wildcats as they lost 38-103.

Although the Eagle’s are not off to a strong start, they still have plenty of time to keep working and implementing their new system that helped them improve last season.

“This year the veterans have come back so confident in what we’ve been doing and they’ve done a great job helping the newcomers to really catch on to that,” GSU head coach Chris Vozab said.

A couple of those veterans that have kept the Eagles’ spirit alive are senior guard MiMi DuBose who is currently leading the Eagles with 18 points scored and junior guard Anna Claire Knight who is following close behind with 16 points.

Although the starting lineup is solid, Vozab believes the Eagles have great players on the bench ready to jump in at anytime.

While for the Gamecocks, junior guard Candice Morton led the team with 17 points in their first game, followed close behind by junior guard Bria’unna Buckner who finished with 16 points.

The Gamecocks won their first game with a 25-point cushion and lost their second game by 21 points, so the matchup against the Eagles could go either way.

The Eagles have been working hard on playing together and communicating, while taking care of the ball and finishing possessions and not giving up in the midst of a tough game.

If the Eagles continue on this path, Vozab trusts they will be more fluid on offense and they will continue to get stronger and more physical inside, which will help the team offensively and defensively.

The game against the Gamecocks is at Hanner Fieldhouse at 5:30 p.m. on Saturday.

Kirkland said, “We’ve just been working so hard this last year, this summer, this preseason. It’s time for us to show Southern what we have been working on.”