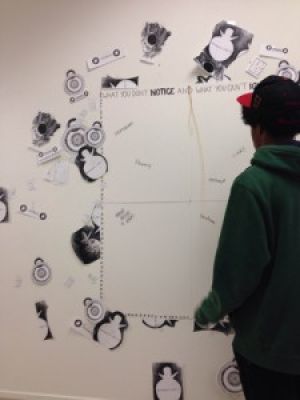 Students who visited the Arts Building in the past two weeks may have noticed something odd infesting the walls.

The designs on the flyers were simple. It was black and white designs with the word “ignore” written in bold letters under it.

Behind this mysterious movement was professor Elsie Hill’s Drawing 3 Class. It was an attempted social movement, an artistic revolution that could never really find its wings.

On the very bottom of the flyers was a link to a blog, the blog itself offered a little more insight as to what the movement was about

On the blog, students sent questions that would be answered by one word either notice or ignore.

One blog posts attempted to explain the project and said, “Sometimes you miss what is right in front of your face, you walk down a hall or through a building and are oblivious to your surroundings.  I feel that we are a reflection of our environment and through this symbol are awakening perceptions and creating an environment that you are unable to ignore.”

What they achieved were flyers quickly taking over the building that sparked interest amongst some students.

“We thought about the bathrooms. How you go in every day and never look to see if anything has changed,” Alex Arnold, senior two-dimensional design major and student in the class, said. “It started out being an experiment to see how others would react, but I think over the length of the project it turned more into how we were reacting to their reaction. Like, how it changed our opinions rather than how it changed them, because I never expected art students to take down other people’s art.”

Not all art students were on board with the movement. In fact, members of Hill’s class actually watched as other art students took the flyers off of the wall.

“I think it was because people didn’t like that we were telling them to do something. What we were putting up were not normal posters or advertisements, it was something out of the normal. They didn’t like being told what to look at or what to do,” Ansley Aycock, senior art history major and member of the class, said.

Students were open with their disagreement about the project.

Students in the class had a theory as to why the project was so controversial. They suggested that people feel persecuted by things that they don’t know about, they naturally think it’s about them.

“I found it an odd thing, but that’s what this kind of project does. The whole point of this project was for the students to experience making art in an environment where they can’t control who touched it. It wasn’t in a museum. It wasn’t in a gallery. It wasn’t up on a bulletin board,” Hill said.

Today, there is a memorial to the student’s work located across from classroom 2042 in the Arts Building. The project didn’t fail, but showed how art can still spark controversy.