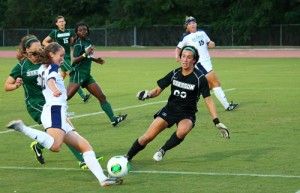 The weekend woes continued today for the Georgia Southern University women’s soccer team as they fell to Wofford College 0-2.

The loss was the second in a row for the Eagles.

In the 69th minute, WC sophomore forward Chloe Brackett took a shot from 15 yards out and managed to fit it in to the right of junior goalkeeper Molly Williams.

As GSU attempted to battle back, WC forward Alex Kachulis sent a header past Williams to make the score 2-0, which would be the final score of the contest.

It was a rough loss but not fatal for the Eagles who play their final regular season game against Davidson College for the ability to head into the Southern Conference tournament. The game will be on Wednesday at 7p.m. at Eagle Field.